In the university at which I am currently employed, Trinity College Dublin, some enterprising staff have organised a free course titled ‘Women in Film’. Over ten weeks or so, academic enthusiasts present a film each week which they feel illuminates that theme. I proposed two, hoping that one might be chosen, but both were accepted and then found myself filling in a gap for an indisposed colleague to make it three – this blog is derived from my notes and presentation to the audiences. 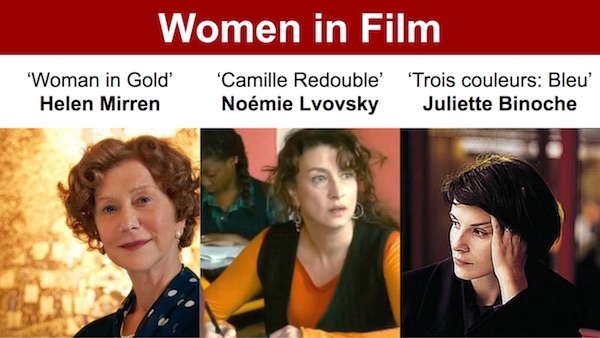 I saw the first two of these three films in the same weekend just before Christmas 2015 by complete chance:

In each case, I had no part in the choice nor any knowledge beforehand of what I was to see, but I felt they both had interesting concerns about being a woman, addressing lifetime change and exploring the contradictions between past potential and present condition.

The third ‘Trois Couleurs: Bleu’ is perhaps the film I most enjoy of all films, having first seen it perhaps twenty years ago – the chance to show it at short notice was willingly seized.

In ‘Woman in Gold’, Helen Mirren plays a strong older woman lead, telling the story of someone who has lived through some of the most wicked acts of the 20th century – the Kristallnacht and consequent theft of Jewish assets, and the flight of Jews from Nazi persecution and death.

The film has mixed reviews.

My reaction was a certain sense of misguided moral compass – what is the meaning of ownership of great works of art and is it properly answered by this film?

Did this film pass the Bechdel test? –  “at least two women who talk to each other about something other than a man”? The test is claimed to be an indicator for the active presence of women in films and other fiction, and to call attention to gender inequality in fiction due to sexism. I didn’t spot it, despite the film featuring at least three strong women.

Finally, is it enough for a film to be carried by a first class actor, offering a compelling and exciting characterisation?

‘Camille Redouble’, directed and starring Noémie Lvovsky, follows a familiar plot device of time transport back to teenage years and reappraisal of life based on the re-confrontation with earlier life decisions and events.

‘Peggy Sue Got Married ‘, ‘Big’ and 200 other films, according to Wikipedia, feature time loops or travel, so this is a well-worn path.

But, typical of french film, the story is told more naturally, humorously but not forced and ends in a more interesting and realistic manner. I felt it relevant to the Women in Film series because it didn’t portray women in the way Hollywood so often does.

Does this film pass the Bechdel test? It did, but it also certainly passed the ‘Millwood test’ for a good film  – ‘did I like any character and begin to care about them’ – I liked them all.

“…what Kieslowski had achieved in these films marked a cross-fertilization of the two great postwar European cinemas that could never be surpassed. He  had composed the hymn to Europe…”.

But Kieslowski’s purpose is not to pursue politics, instead it is to explore the interleaving of human lives, coincidences, and the individual challenges faced in overcoming great tragedy. In this sense, ‘Bleu’ has a lot in common with both ‘Woman in Gold’ and ‘Camille Redouble’

It begins with a car crash, setting an unbearable challenge to Julie (Juliette Binoche) as she encounters a disastrous form of liberté, shaped by one question : how to continue living when all ties are broken.

Filmed with remarkable cinematography, thrilling music and a delightful, sparse intensity, the story addresses some of the accommodations women must confront due to significant loss, discovered adultery, maternity, sexual promiscuity, a fractured relationship, Alzheimers and a musical Matilda Effect (the systematic repression and denial of the contribution of woman scientists in research, whose work is often attributed to their male colleagues). As Julie navigates these issues, her growing generosity and engagement with creativity and life is uplifting, and the ending is deeply moving with its vital optimism and hymn to enduring love.

A theme which is explored throughout Kieslowski’s trilogy, is the reunification of Europe. The connection between Poland and France, at that time perhaps the leading nations in art cinema, is personified by Juliette Binoche herself who has Polish origins. I find it hard to recall just how things were in the early ’90s, when such countries were only recently reconnected after being on opposite sides of the Iron Curtain for forty years or so, but I did feel excitement.  In ‘Bleu’ the choral music is an anthem to the unified European ideal, which was so vitalising and influential at the time of the film’s making in 1993. In a parallel with the negotiation involved in making a new Europe, the process of composition to complete the music takes place in the film itself.

All this is sadly apposite in the current circumstances of ‘Brexit’ inspired by Little Englanders in my own home country of England. For me, as a committed European, the unutterable loss that Julie endures, and overcomes, is perhaps a metaphor for my own prospective loss with an impending referendum on leaving the EU, all thanks to that other car crash known as Cameron and his Conservative cronies.

What about Juliette Binoche? It is hard for me to guess how others, men and women, react to her, but for me she is without compare, not for her sexuality, but for her powerful sense of moral compass and serene beauty. Her own discussion about involvement in the making of the film touches on a central concern for women actors – how is the film to portray women’s position? Binoche, in her discussion about the possibility of gratuitous nudity, says: “You feel like an object. You no longer feel like a subject”, explaining how the media so often misinterpret her acting as a result. And yet she is generally content to see her body used as a vehicle for communicating the director’s intent. With “Bleu” she describes a happy and relaxed relationship with Kieslowski, who seems to be concerned that she does not suffer indignities, even reportedly flying into a rage when Binoche proposes to cut her knuckles for one rather harrowing scene. 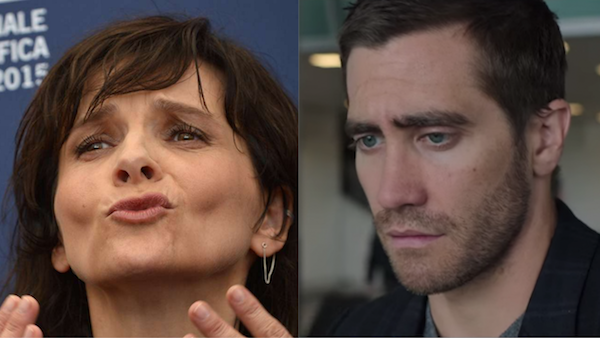 Just two nights before showing ‘Bleu’, by chance, I watched Jake Gyllenhaal in ‘Demolition’ as part of the Dublin International Film Festival. ‘Demolition’ arguably parallels much in ‘Bleu’, starting with a car crash which kills Gyllenhaal’s partner, but with a quite different sensibility and rather less ambition. Indeed ‘Demolition’ might well fit into a ‘Men in Film’ course: the camera lingers on Gyllenhaal’s face and body for much of the time, but I suspect the media will see it as great acting rather than exploitation of his undoubtedly handsome face and body!

In both films, in truth, I didn’t once doubt the director’s intent – to make the best possible use of the sophisticated collaboration between actors, crew and director, and their profound artistry.

I recommend all these (films, directors, actors and crew) to you without reservation and thank the organisers of the Women in Film series for the opportunity to indulge myself. The opportunities and coincidences that lead to this particular set coming together would have had Kieslowski smiling.

One Reply to “Women in Film”