I found your report in the Guardian moving and important – recognition and acceptance that we have a problem is vital to recovery and I wish you well with yours.

I, like you, subscribe to Hargreaves’ “unconditional positive regard” and I am an unreformed “new romantic”, tempered with a little “lion tamer” and “entertainer” when needed!

Nevertheless, I was troubled by this paragraph:

“They say the first step to recovery is admitting you have a problem. At last I can admit that, yes, I do have a mental health problem. I don’t know what it is about me but, without my daily dose of antidepressants, I stop being the man I should be. There is a chemical inbalance in my brain that needs this but I have stopped wondering why: I just accept it. I have depression and, like my asthma, it’s something I have to learn to live with.”

I rewrote it in my own words as though speaking for society rather than as an individual:

“They say the first step to improvement is admitting there is a problem. At last society can admit that, yes, it does have more people experiencing mental health problems. We don’t know what it is about society but, without daily doses of antidepressants, people stop being as functional as they should be. There is a chemical inbalance in their brains that needs this but we do not need to wonder why: we just accept it. They have depression and, like asthma, it’s something they have to learn to live with.”

I find this rewrite unnacceptable!

It is not good enough for society to be satisfied with recognition of illness: we must challenge the root cause. In this case, the currently accepted model, that there is a chemical imbalance in brain, is not supported by the scientific evidence, as most psychiatrists will now agree ( see http://joannamoncrieff.com ).

An obvious alternative explanation for society to consider is that ill-health may be caused by the increased complexity and demand placed on teachers, especially if they are child-centred in their approach and subject to ever increasing inspection, parental demands and concerns about risk. I experienced a little of this stress recently as a school governor (my teaching days were in the seventies): we were expected to take responsibility for and annually review over twenty school policies, all with the threat of imagined risks if we were to put a foot wrong – and we weren’t even doing the day-to-day job!

My view is that we, society, needs to take this seriously: that we are placing too high a demand on teachers. When this is combined with teachers’ dedication to every individual child, management by targets & competition and a media habit of blaming teachers for problems in education, it can surely explain the kind of breakdown you report. It is in my view society’s responsibility to find solutions through better organisation of education. Sadly, it is simpler to blame the individual’s biochemistry and hand out unproven chemical ‘cures’ to paper over the cracks. It remains to be seen if it is cheaper or more sustainable.

I hope you do not take my words as suggesting that you were not up to the challenge of modern society and that if only you could “pull your socks up” you’d be able to overcome your condition – I am anxious here to show that the argument that we should “man-up” as individuals to modern problems is ignorant and inadequate. My purpose in writing this is to say we, society, have created the conditions for people to suffer and we should take our collective responsibility seriously. I suggest that for every person like you, there will be many more who aren’t able to recognise a mental health problem, but who are quietly self-medicating with alcohol.

With unconditional positive regard and the greatest respect to all those suffering,

PS Thanks to @Yorks_Bunny for alerting me to this, and for giving me this link to a Secret Teacher blog from a year ago which also addresses this issue.

On Friday, I left my meeting in London and set off from Liverpool Street Station to Essex (the only way is Essex, I live in Brentwood).

“It was as if the daylight had changed with unnatural suddenness, as if the temperature of the evening had altered greatly in an instant or as if the air had become twice as rare or twice as dense as it had been in the winking of an eye; perhaps all of these and other things happened together for all my senses were bewildered all at once and could give me no explanation.”

I didn’t get out at my usual stop, but instead the train continued towards Southend and I disembarked (thanks Sasha) at Southend Airport.

Had I fallen asleep on the journey? Was I in a dream?

I got on a plane to Dublin and found myself inveigled into a secret-service plot to surprise my friend Boyd for his birthday. A black limousine met me at the airport with good friend, colleague and Boyd’s partner Eileen and Tom ‘No. 1 son’, who whisked me to a pub to mark time with Eileen’s old friends (and a Guinness). Then we collected Zac ‘Besty’ (George Best? Animal? or simply the best?) and finally we hid in Findlater in Howth to await the birthday boy. Hosted by Sabine, we enjoyed a fantastic sea-food skillet and laughed and lived our love of family. Aoife offers me a bed for the night and she and I have a cracking conversation long past my bed time.

Saturday, like in all my best dreams, was spent at a stimulating Association of Teachers’ / Education Centres’ numeracy conference, re-connecting with Eileen Two and meeting the vibrant Dolores Corcoran (where were you Elizabeth?). I guess I should have been suspicious of the conference title – ‘Does it All Add Up?’

Later the birthday party continued with Boyd and Eileen’s neighbours and friends – more cracking conversation and such warm, good people.

Food from Joan (now known as Jo-an-issima) was spot-on, with the shiniest cutlery and glasses. Sing-songs and good company. Shared a brilliant falling star with Aoife and I had to be taken home by the delightful Nessa. It’s not usual to sleep in dreams and I didn’t sleep much before Sunday morning. On waking to a dawn over Dublin Bay, I am off in another limo, to the airport, to fly to London Gatwick.

I then enter another level of dream – ‘in transit’ – like the novel by Brigid Brophy, that I marvelled at as teenager. Vana arrives and we work on categorising future trends in TEL before a flight to Turin, Italy.

We meet Katherine, who drives us to Pollenzo in Bra, to L’Agenzia di Pollenzo ‘si fa in quattro’ the international headquarters of ‘slow food’. The ‘quattro’ are our hotel Albergo dell’Agenzia also housing Guido Ristorante Pollenzo, the Banco Vino (wine bank) and best of all, the University degli  Studi Scienze Gastronomische (University of Gastronomic Sciences) – “the first academic institution to offer an interdisciplinary approach to food studies”. The whole campus is built on part of the UNESCO World Heritage site of King Carlo Alberto’s 1835  Savoy Estate, which in turn is built on the Roman town of Pollentia.

I sit down to dinner with Vana and Katherine:

with a powerful Barbaresco from close by, and we speak all night of creativity.

In this heavenly dream, I wonder how did I deserve or manage such a dreamy, surreally wicked dream weekend, at such times in higher education…

“…with the drink trade on its last legs and the land running fallow for the want of artificial manures” ?

I began to realise, unlike the narrator in Flann O’Brien’s The Third Policeman, who doesn’t know he is in hell, that I must be in heaven and that I passed in my sleep on the train from Liverpool Street.

This article about ‘brain science’ and policy relating to early childhood development by Chris Corrigan is uplifting and affirmative, but the ‘still face’ video showing a child interacting with mother and then being shunned is heartbreaking, saved by a happy ending. The notion that interpersonal relations start early is tacitly obvious to many, but this video articulates it so clearly.

The extension, to ask whether society presents a ‘still face’ to young people may be a leap to far, but it could be argued that ignoring the interests of the young leads to upset, perhaps amply demonstrated by the recent action by students in response to a reduction in government funding of further and higher education in the UK.

Thanks to Jonnie Moore for highlighting this. 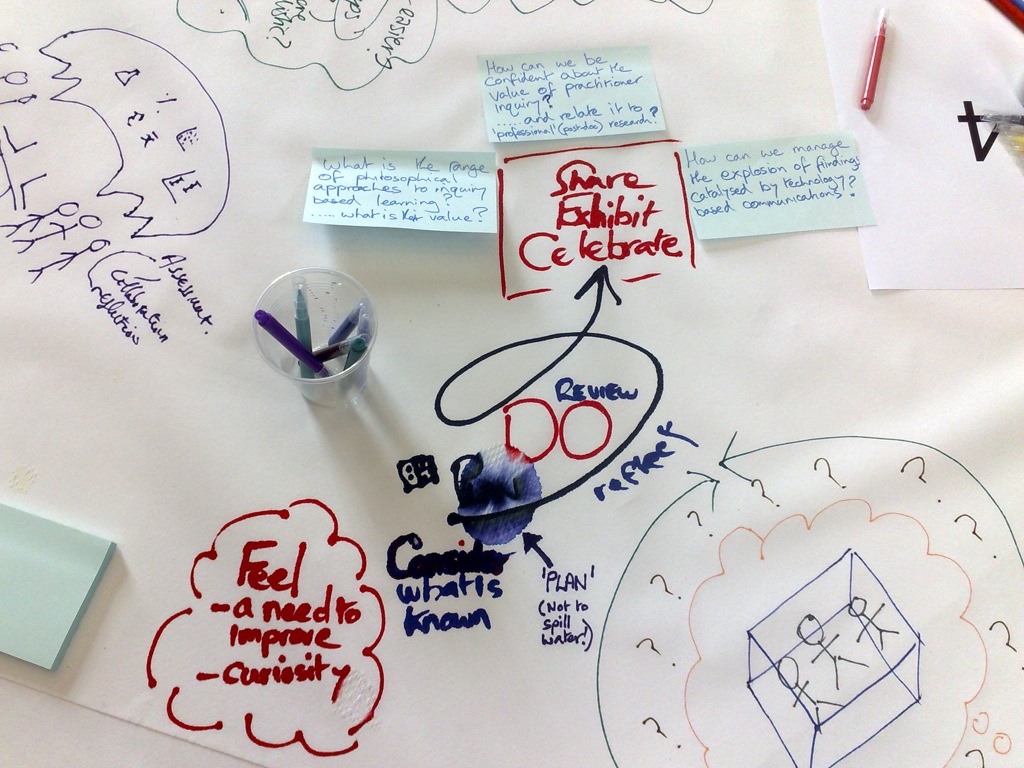 The Learning Through Enquiry Alliance conference at Sheffield University is a breath of fresh air – practitioner led, but research oriented, but above all a sense of camaraderie with many others struggling with the ideas we have been exploring for the last five years.

A ‘world café’ exercise to break the ice led to my re-draft of an action inquiry model on the tablecloth, adding my latest concern for ‘feeling’ based on my interest in John Heron’s work. I have added a ‘FEEL’ aspect – feeling the need to improve, feelng curiosity which relate to Heron’s ideas of zest and interest around delight. We have for a long time talked about exhibiton as a mode of assessment – I have clarified in this diagram by adding the word ‘celebrate’, that this is as important to feeling as it is to knowledge and communication.