It’s been a week!

First, Friday last –I hear about the success of the ‘Tá’ (Yes) in the Irish referendum to repeal the 8th amendment to their constitution that forbade abortion – no more.

Then Monday – I have the moving pleasure of hearing a concert by the 77-years-young Joan Baez, singing with power at the Albert Hall.

And finally on Tuesday – I helped screen a preview of the excellent film ‘Sink’, viewing and discussing with friends in the local Labour Party and in the company of the film’s writer and director, Mark Gillis.

Set in London’s East End, the film portrays Micky, a working class man who attempts to keep his family – himself, his aged father and troubled son – afloat in the context of a punishing welfare & jobs regime. In the film, metaphorically and literally, the banking crisis of 2007 looms on the London skyline, but I found myself taking issue with others in our discussion after the film. It was suggested that the current ‘system’ was an inevitable response to that banking crisis. Although I would be just as judgemental about the bankers, I felt that the system is in fact a deliberate design by the Conservative government that used austerity (I like to call it arseterity) as a cure for notional overspending by the previous Labour government. It has proven to be a wicked and cruel policy that has impoverished the weak and enriched the already wealthy.

The film portrayed Micky as helpless, as he sinks within that system until in the end he decides to transcend it, introducing a moral complexity that got us talking.

So what else could be done? First we must recognise that the system is no accident and that it can be changed. My friends in Ireland who had canvassed in so many neighbourhoods, Joan Baez singing Joe Hill and my own systems thinking inspire this recognition in me!

As an enthusiastic member of the Institute for Educational Cybernetics a few years ago, I became clearer about the value of a systems thinking approach to addressing social challenges – specifically, in my case, the design of education. Cybernetics was famously applied in the context of central government (a word that is fundamental to the field) in the case of Cybersin and Allende in early seventies Chile.

But such centralised thinking must be matched by consideration of each individual’s need to think, value, and act accordingly, to make any system function well.  We can suffer as victims of a system or we can choose to become effective ‘ants’ and through principled action, change it or make it serve our collective needs!

For me, this is why I chair the local Labour Party and seek to encourage members to work together, respecting their diversity and humanity.

In the wonderful world of Twitter, I serendipitously came across Lankelly Chase. I won’t address all of their work here, but I do recommend their account of their vision, mission and values, which focus on the systems which surround those who suffer severe disadvantage.

I think their model of systems behaviour, although intended to help improve matters for the likes of Micky, could also be applied more widely, but with one proviso – it should address the system and the individual.

The system behaviours Lankelly Chase identify in this regard are about perspective, power and participation and relate to ‘everyone’ and their understanding of the system – I have added my notes to these and to their assumptions.

What do you think? 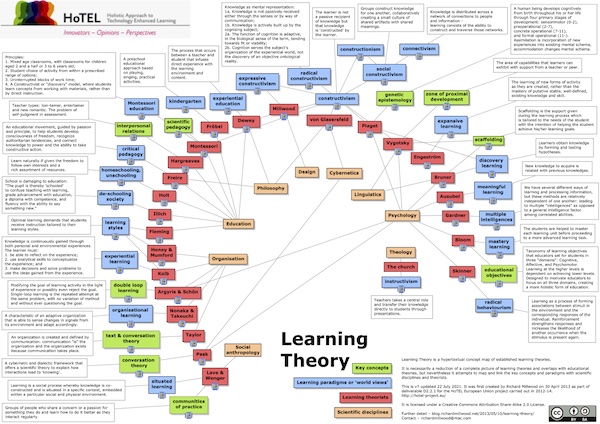 I have been working for the HoTEL EU Support Action recently at Brunel University and I was asked to produced a report on learning theories – a struggle, since there seem to be so many ‘isms’ and often I come across what seems to be the same theory, but from a different disciplinary or professional context.

So, this A3 poster of Learning Theory was central to the outcome and I would welcome feedback, especially since I will use it as part of my theoretical and conceptual framework for my PhD by Retrospective Practice. There is also the interactive CmapTools version with clickable links to Wikipedia and InfEd.

Here is an extract from the report:

“Learning theory has been a contested scientific field for most of its history, with conflicting contributions from many scientific disciplines, practice and policy positions. With the continuing and disruptive influence of technology on information, knowledge and practice in all sectors of society it is no wonder that innovators, drawn to the interactive potential that computers bring to learning, are challenged by the theoretical basis for their innovations.

Formal education is also a high stakes, culturally & institutionally conservative activity, which serves more than one societal purpose, including:

Each of these societal purposes and these learning outcomes demand different approaches and understandings for the theorist and may develop at varying rates or found to be diverse in relation to context, location and culture.”