Following up my presentations in 2007 at Naace in Feltham  ‘The Importance of Computing as a Specialist Subject in Schools‘ and in 2010 at Computing@School in Birmingham ‘Computing at School‘, I am hosting a table at Collabor8 4 Change at BETT 2012 this year .

Titled ‘Conceptual framework for computing‘ it is planned to be a discussion of how we can be clearer about the nature of the computing subject at primary and secondary level and in particular how we can know better the continuity and progression for learners.

My challenge, in the context of computing and ICT  is:

Here are the few slides to kick off the discussion – I shall add an update to this post when we have had it!

The two sessions went well, with interesting feedback. For most participants, there were more important issues at the level of teacher competence, school organisation and the government’s upheaval of ICT and Computing, which deserved more debate time. On the other hand few felt that I was wrong!

I enjoyed Kathryn Day’s session, ‘ ICT vs Computer Programming curriculum ‘ which usefully contrasted the many documents that inform (or confuse) the practitioner when planning.

I also attended Chris Ratcliffe’s session ‘ How much should pupils be, or feel, in charge of their work? ‘ which clarified some of the barriers to further responsibility being transferred to pupils, whilst agreeing it as a good thing.

Finally I joined Steve Philip for his session ‘Curating the past is more important than creating the future’ in which he proposed the term ‘curativity’ – the act of curating the avalanche of creative work made possible in schools with digital tools through selection, deletion, categorisation and preservation/presentation for an audience. Highly relevant to the National Archive of Educational Computing!

Well done to all the presenters & participants and to  the organisers: Penny Patterson, Dave Smith and Terry Freedman and to compère Russel Prue – the round tables format has a lot to recommend it, with more time for exchange in contrast to the more theatrical Teachmeet.

‘Warning over children’s multi-screen viewing’, a BBC web site article by Katherine Sellgren from August 2011, updated today and hence came up for my attention, reports on research at Loughborough and Bristol universities. They found children (63 in Bristol) were often “multi-screen viewing” – watching TV while simultaneously using smartphones, laptops or hand-held gaming devices. Furthermore, they are reported as saying such habits are linked to obesity, poorer mental well-being and health problems in later life.

If you read their peer-reviewed published research report, the claims are somewhat softened – the health problems are concerned with adults mostly and with too much overall screen watching. And in the discussion, the reasons expressed by the 11-12 year olds give comfort – they are common-sense explanations which confirm the thirst for knowledge, activity and social communication:

“Participants reported that there were three main reasons for engaging in multi-screen viewing.”

“Firstly, it tempered impatience that was associated with a programme loading or waiting for a response to a text message or instant message. For these children the second or third screen filled the time and prevented boredom.”

“Secondly, multi-screen viewing was a reactive response that enabled the child to use their time more efficiently as they could filter out unwanted content such as advertisements and focus their attention on just the content that interested them.”

“Thirdly, multi-screen viewing was a proactive decision with the children opting to do two or more things at once as it was perceived to be more interesting or more enjoyable.”

Still, no clear certainty that the health problems are actually caused by multi-screen viewing (sad, fat people may prefer to watch television than join in team sports).

My colleague and friend Stephen Heppell discussed this issue nearly twenty years ago (!) in ‘Children of the Information Age and the Death of Text‘ – an article that first appeared in the Society of Authors’ journal “The Author” as part of a computer focused edition “The Electronic Author”, in Summer 1993.

In the article Stephen writes:

“…the TV too is typically reduced to a small information window in a larger social context – children watch it whilst browsing a magazine, listening to music, playing with their “Game Boy” or whatever.”

“We should not view this as a deficiency model of children. It is not that their concentration threshold has declined; rather, they are not happy anymore to adopt the role of passive information consumers. This is progress.”

I find it simply amazing how frequently researchers judge children’s habits as deficient before proving the causal question – is it the multi-tasking use of multiple sources of information which leads to the health and well-being issues suggested?

Might there be a connection with the food industry, dysmorphia or the ‘stranger-danger’ fear of playing outside?

How has the research shown any connection with later life?

Most importantly, why are we discussing passive ‘screen viewing‘ as being the predominant interaction in the contexts described when modern mobile technology is all about active choices, games, social communication and creativity? 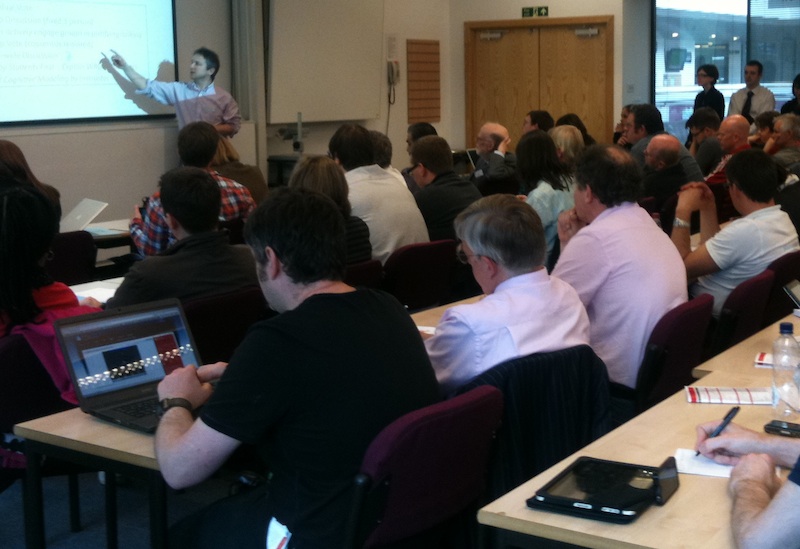 I presented at the third annual Computing at School conference, reporting Nili Naveh’s research in a seminar I proposed to discuss the research into childrens’ conceptions in computing. The central issue is the contrast in the attention paid to children’s conceptual development in maths and science compared to computing. In maths and science, research has established a Piagetian analysis based on data of what percentage of children can achieve which conceptual understanding at a range of ages, and this is the basis for the National Curriculum levels. Clearly this should not be used as a straitjacket – there is a diversity in attainment and children are often underestimated. Teachers have excellent tacit knowledge of this, but I argued it may be helpful to articulate this more clearly and to construct a data-gathering exercise from schools across the country. We had a good discussion, thanks to some really good presentations earlier in the day which gave good fuel for our debate. Here are my slides:  Algorithms + Data Structures = Programs.